We work with natural materials which means every piece is unique. Grain, Colour, and Texture may vary slightly from piece to piece.

I had this case for my iPhone 11 and loved it, the design looks fantastic and it offered just enough protection without being bulky.

When I recently upgraded to the iPhone 13 I bought the same case again, but the quality seems to have gone downhill quite a bit in the past couple of years. There’s a very noticeable gap between the main inlay and the rubber frame all along the bottom and the lower right of the case, and some of the inlays that make up the design are different thicknesses, creating raised edges that can be felt when holding the case. The inlays also seem to have been cut out with far less precision than my previous case, and don’t fill the spaces nearly as well. The rubber around the frame is also quite a bit thinner and softer than on the iPhone 11 version, and after only a week of use, the rubber along the bottom with the cutouts for the charging port and speaker/mic has started to stretch and is almost floppy now. I haven’t taken the phone out of the case since receiving it, so this has happened just from the phone going in and out of my pocket.

I gave Keyway the benefit of the doubt and sent a private message to the support team before posting a review. They responded quickly, apologized for my dissatisfaction and offered to replace the case for me right away. They asked for me to send some pics of the issues just for their “own records”. I sent the pics and then they stopped responding. It’s been over a week and they have not acknowledged receiving the pics or given me notice that the replacement they promised is being sent.

Overall, I still love the look of the design and love that it’s made from wood, but the case is definitely not up to the standard that I’d expect from a $45 phone case, and the customer service has fallen short.

Thank you for the feedback Kevin! We take quality issues seriously and are making sure to look into the issue you brought up. My apologies about the communication delay, I believe at the time of this review posting we've closed this case with you, but if there are any other questions or concerns please don't hesitate to reach back out!

Elegant design and craftsmanship. Well constructed of quality materials. Case is a perfect fit for the iPhone 13 Pro. Very “grippy” as well. Keyway is simply the best.

Was a Christmas gift for wife. Haven't used it yet but looks great and feels like it will last.

The only cell phone case I use! Strong and look wonderful!

I LOVE this Campfire Theme Keyway iPhone Case !!!
I spend lots of time in the woods camping and this is a perfect case for my iphone! The woodgrain is beautiful and the construction is top notch. I know it will eventually get worn down from rugged use but I hope it stays beautiful even with some patina on it.
Thanks for a great product and a great selection of styles. 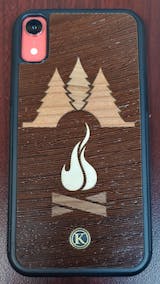